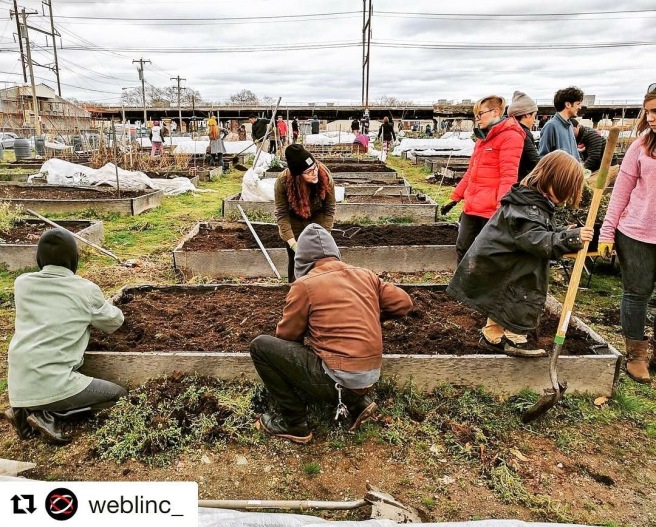 Our gardens have officially opened! Early April saw the beginning of the growing season as community members and refugee families came out in full force to help clean, prep, and get the garden beds ready for the upcoming months.  We saw volunteers and refugees of all ages and abilities helping to weed, soil, and get each plot prepared for a strong spring planting.

We’re looking forward to a vibrant, verdant, and overgrowing season.

Our upcoming work dates are: 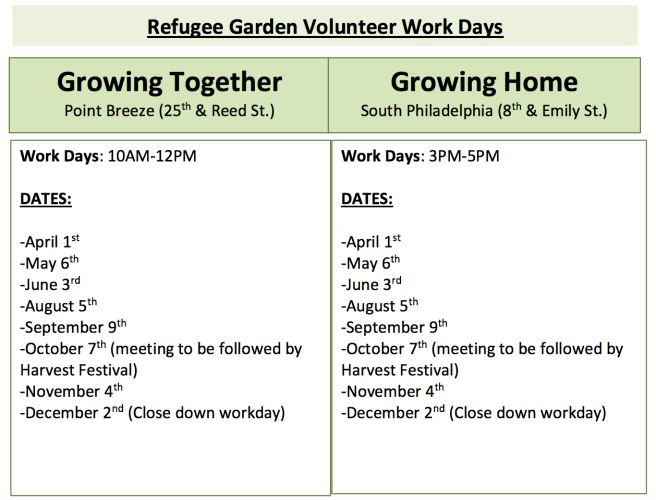 There are still a few plots available! If you’re interested in volunteering or just checking out what we’re about, please email Pablo Baeza at pbaeza@nscphila.org.  We look forward to seeing you this growing season. 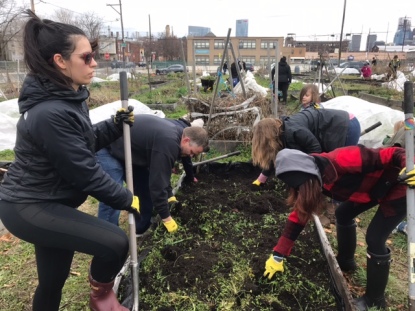 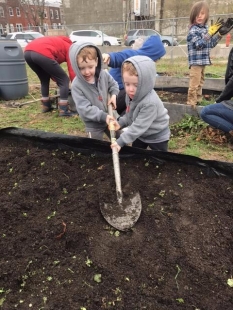 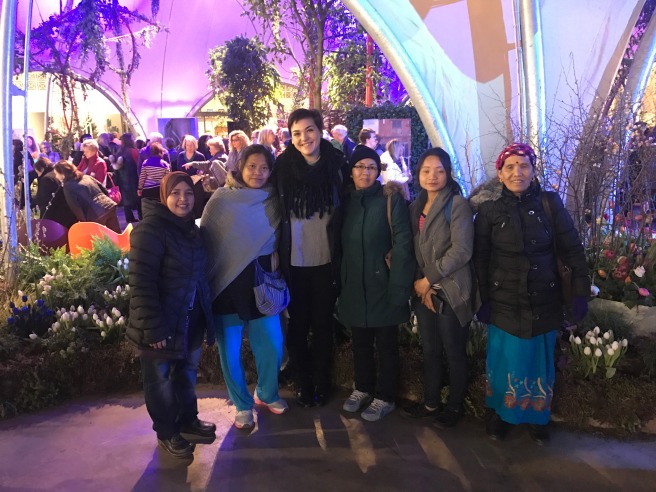 Refugees attending our vocational English as a second language class recently visited the annual Philadelphia Flower Show, an event sponsored by the Pennsylvania Horticultural Society (PHS).  It is with PHS support that NSC has been able to successfully launch the Growing Home and Growing Together Refugee Community Gardens.   This year, PHS was able to donate tickets for all  students – and some interns and volunteers – to attend the show for free, immersing themselves in this year’s theme of “Holland: Flowering the World.”

We took the flower show on, experiencing the vibrant colors, sounds, and sights within the oldest and largest show of its kind.  Daffodils and tulips of all shades lined walkways and bridges; bright lights and music accompanied the main spectacle; informational walk-through exhibits of diverse plant varietals dotted the entire convention center.

We learned about sustainability and green-living within the Dutch inspired eco-dome, and witnessed an immense variety of colorful and interesting flowers – from roses to orchids to hyacinth.  We also were able to see immense and baffling showcases of flowering displays constructed by some of the world’s best garden designers and inspired by Holland.  There were windmills, bikes, meandering streams, and, of course, tulips strewn throughout the expansive show.

We enjoyed our time learning about sustainability, gardening, and plant varieties at one of the best and most intricately designed flower shows in the world.  We also, obviously, enjoyed the amazing photo ops, and took more than a few selfies together. 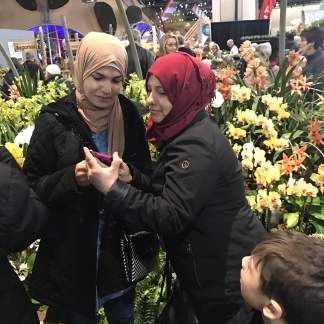 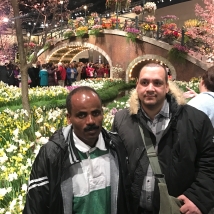 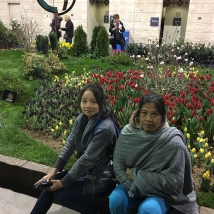 On Wednesdays, the earthy smell of fresh basil permeates NSC’s office, drawing staff away from their desks to the main lobby. Here they find the Refugee Farm Stand, a weekly farmer’s market that has taken place at NSC since June 29, 2016. It’s not just NSC staff that are drawn to the farm stand. Clients line up, eager to have a small taste of home and cook with vegetables from their homeland – roselle, bitter melon, mustard greens… Congolese children grin as they bite into the first harvested African eggplants of the season; in fact, the first African eggplants harvested in all of Philadelphia.
NSC has operated two refugee gardens in South Philadelphia for several years now – Growing Home Garden since 2011, and Growing Together Garden since 2015. To date, these gardens have met the nutritional needs of refugees, created a safe community for newcomers, and provided a space for families to put down roots as they begin to call Philadelphia home.

In 2016, several gardeners were granted with an additional opportunity – to participate in the Beginner Farmer’s Training program, provided by Pennsylvania Horticultural Society and funded by the U.S. Department of Agriculture. Through this program, the twelve current participants, all socially disadvantaged individuals of Philadelphia including three refugees, learn about organic crop planning, propagation, planting techniques, harvest and post-harvest handling, farm marketing, and business development. The three refugee participants, now entrepreneurial growers, decided to start a farm stand at NSC, with the hopes of possibly expanding at a later point to the Point Breeze neighborhood where the Growing Together Garden resides. All of the produce in the farm stand is planted, grown, and harvested by these three individuals, using the skills and knowledge they acquired in training, supplemented by the farming experience they bring with them from Bhutan, Burma, and the Democratic Republic of the Congo.

Those eggplants that children happily bit into this week came from the seeds of a single African eggplant in Concord, New Hampshire. The 168 seeds from that single eggplant are now being harvested for the first time in Philadelphia. Many of the other crops are ones that originally came from refugees’ countries of origin, seedlings that were carefully preserved and that have now become a part of Philadelphia’s biodiversity.

Food access is a crucial part to refugees’ integration into their communities. Many are resettled into low-income neighborhoods and food deserts, meaning it is difficult to find affordable and nutritious food within a reasonable distance. With many refugees arriving with a number of health issues and living close to or below the poverty line, being able to provide their families with healthy and reasonably priced food is of utmost importance. The gardens have granted the opportunity to those who work at the gardens to grow their own food.
With the new farm stand, the availability of affordable and healthy food has been extended to those who don’t have plots at the gardens or who do not live in the same neighborhoods as the gardens. Now, clients coming into NSC’s office are able to benefit from the ample produce that the entrepreneurial growers bring in each week: green onions, several varieties of kale, beets, collard greens, peppers, and so much more. By planting seedlings and providing this produce to the community through the farm stand, biodiversity in Philadelphia’s food systems is increased and gastronomic traditions from around the world are protected. In other words, the entrepreneurial growers are giving a true gift not only to the refugees served by NSC, but Philadelphia’s residents as well.
When so much is unfamiliar, when the language is new, the urban environment is so different, the people surrounding you are not your family and friends but strangers, it can be momentous to bite into a bitter African eggplant for the first time in months or years, to be able to bring that to your family and cook a familiar dish you haven’t cooked in so long. Not only do memories come flooding back, but your new home begins to feel a bit more like that – home.

In 2016, NSC and PHS, its refugee-garden program partner, launched an entrepreneurial garden and farmer-training pilot program. Housed at our Growing Together garden site in Point Breeze, key programmatic initiatives for this year include vetting crops, providing business-development training, and preparing refugee farmer’s for job readiness in the agricultural sector.

On June 29, NSC hosted our first farmers market in our lobby on Arch Street. During market hours, staff and NSC clients were able to purchase affordable, just-picked produce. All of the featured crops were grown locally by three of our refugee farmer-training participants. Carrots, beets, collard greens, green onions and kale were among the fresh-grown offerings.

We’re looking forward to seeing what fresh produce these farmers continue to bring throughout the summer! Stay tuned for more farmer’s-market dates.

Mustard greens can be found simmering in pots across the globe. Believed to have originated near the Himalayas thousands of years ago, they’re grown in in most Nepali kitchen gardens and are eaten multiple times per week. Nepal is one of the leading producers of these greens.

A member of the brassica family – home to broccoli, cauliflower, and cabbage, among others – these peppery, pungent greens deliver a sharp bite, and come in a range of sizes and colors. The flavor can be mellowed through cooking, and they are well worth introducing as a kitchen staple.